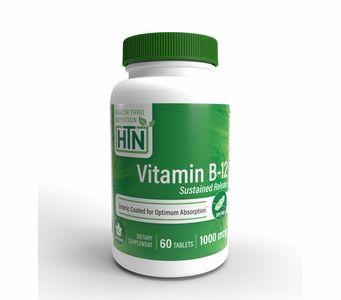 Vitamin B12, also called cobalamin, is important to good health. It helps maintain healthy nerve cells and red blood cells, and is also needed to make DNA, the genetic material in all cells. Vitamin B12 is naturally found in animal foods including fish, milk and milk products, eggs, meat, and poultry. Fortified breakfast cereals are an excellent source of vitamin B12 and a particularly valuable source for vegetarians. Diets of most adult Americans provide recommended intakes of vitamin B12, but deficiency may still occur as a result of an inability to absorb B12 from food.

Up to 30% of Adults over age 50 may be unable to absorb vitamin B12 in food and may need a dietary supplement.

Characteristic signs of B12 deficiency include fatigue, weakness, nausea, constipation, flatulence (gas), loss of appetite, and weight loss. Deficiency also can lead to neurological changes such as numbness and tingling in the hands and feet. Additional symptoms of B12 deficiency are difficulty in maintaining balance, depression, confusion, poor memory, and soreness of the mouth or tongue.

CAUTION: Some of these symptoms can also result from a variety of medical conditions other than vitamin B12 deficiency. It is important to have a physician evaluate these symptoms so that appropriate medical care can be given.

Is there a health risk of too much vitamin B12?

Vitamin B12 has a very low potential for toxicity. The Institute of Medicine states that "no adverse effects have been associated with excess vitamin B12 intake from food and supplements in healthy individuals." The Institute recommends that adults over 50 years of age get most of their vitamin B12 from supplements or fortified food because of the high incidence of impaired absorption of B12 from unfortified foods in this population.

Are you Vitamin B12 Deficient? Click here to find out!

Triple release for the most effective dosage form other than a B-12 injection in a Dr's office.

Optimum utililization by the body

IMPORTANT: This is a specially-formulated Triple Release System designed to provide optimal oral absorption of B-12 by releasing: 333 mcg Orally (in the mouth), 333 mcg Gastrically (in the stomach) and 334 mcg Enterically (in the intestines).

2. (gastric): After the flavor is no longer perceptible, swallow the tablet with water, and it will be further absorbed in the stomach.

3. (enteric): The Vitamin B-12 will then be released in the upper portion of the small intestines where it is best absorbed.

Mannitol in Triple Action B12: Why?

Mannitol is used to make a trituration of Vitamin B12 to ensure it is uniformly distributed in the tablets. The amount of Mannitol in the tablet is a few milligrams – NOT grams. Mannitol taken orally at these levels is 100% safe!

In a specially formulated Triple Release System designed to provide optimal oral absorbtion of B12 by releasing 333 mcg Orally (in the mouth), 333 mcg Gastrically (in the stomach), and 334mcg Enterically (in the intestines).

Directions: Adults: Take one (1) tablet daily before or after meals, or as directed by your healthcare professional. 1) Partially dissolve tablet in mouth. 2) After the flavor is no longer perceptible, swallow the tablet with water. 3) The Vitamin B-12 will be released over an exteneded period.

1) (Oral): Partially dissolve tablet in mouth.
2) (Gastric): After the flavor is no longer perceptible, swallow the tablet with water, and it will be further absorbed in the stomach.
3) (Enteric): The Vitamin B12 will then be released in the upper portion of the small intestines where it is best best absorbed.

Magnasweet® is a registered trademark of Mafco Worldwide Corp.