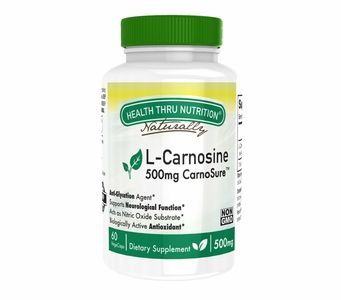 CarnoSure™ brand L-Carnosine is the only L-Carnosine that is laboratory tested and verified using 100% independently developed and validated Primary Reference Standard and HPLC Method of Analysis.

There is a large body of clinical research that shows that the human body requires L-Carnosine in order to properly function. Healthy people have especially high concentrations of L-Carnosine particularly in the brain and the muscles. As we age, however, there is a significant reduction in L-Carnosine concentration levels, suggesting an important parallel between L-Carnosine and our health and wellness. The multi-faceted uses and therapeutic benefits of L-Carnosine are many, and clearly established in countless studies published in leading medical and scientific journals from around the world.

Here are some of the many uses of L-Carnosine:

Research shows that L-Carnosine is one of the most profound antioxidants ever studied. It has been proven to significantly reduce oxidative stress, and inhibit the intracellular formation of reactive oxygen species and reactive nitrogen species.Moreover, L-Carnosine has been found to regenerate cells approaching senescence (the end of the life cycle of dividing cells), making L-Carnosine a remarkably potent, biologically active, and clinically important antioxidant.

The natural substate for generating nitric oxide synthase (NOS) activity has been shown in published research to be L-Carnosine, producing a multi-fold increase in activity versus all other compounds tested. Because of L-Carnosine’s NOS properties, studies show that it has meaningful applications in cardiovascular health and function. Specifically, L-Carnosine has been shown to have anti-inflammatory, vasodilation, and inotropic (increased cardiac output) properties.

Because of L-Carnosine’s well defined role in protecting and extending the life span of human DNA, cells lipids and proteins, research shows that it can and should play a fundamental role in meaningful anti-aging protocols. Studies demonstrate that L-Carnosine can markedly impact not only the many clinical markers of the aging process, but also the physical signs of aging-such as, the visual appearance of skin, by inhibiting the cross-linking of collagen.

L-Carnosine is found in especially high levels in the brain, and in particular is concentrated in nerve cells (neurons). Studies demonstrate that L-Carnosine enhances frontal lobe function and is neuroprotective. Clinical testing has shown that the brain uses L-Carnosine to protect against cross-linking, glycation, excitotoxicity, and oxidation -- a key role in neurological function.

L-Carnosine is well established in scientific literature as the most potent, naturally-occurring inhibitor of AGEs (Advanced Gycation Endproducts, which are characterized as the cross-linking of proteins with glucose that lead to oxidized end-products). The occurrence and buildup of AGEs have been closely associated with the development of complications common with type II diabetes (mellitus)-including, cataracts, neuropathy, cardiovascular disorders, and kidney failure.

Other Ingredients: Gelatin and magnesium stearate.

Free of: starch, sugar, yeast, wheat, milk products. This product does not contain any preservatives, artificial flavors or synthetic colors.

Directions: Take one (1) to three (3) capsules daily with meals as a dietary supplement or as directed by your healthcare professional.