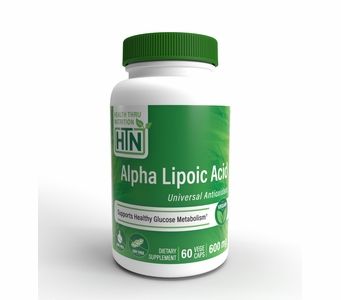 Alpha Lipoic Acid, abbreviated as ALA, is a coenzyme that provides important metabolic functions, such as aiding in the breakdown of macronutrients (protein, carbohydrates and fats) for energy production [1] , while also offering superior antioxidative benefits.

ALA is often referred to as a “Universal Antioxidant” due to its ability to neutralize free radicals in both lipid and aqueous environments, as well as its wide versatility in targeting those oxidants, making it ubiquitously beneficial in all body systems. [2] Going a step beyond some other antioxidants, ALA can regenerate many essential antioxidants such as glutathione, vitamins C and E, and coenzyme Q10 [3] while helping to repair cells damaged by oxidation [4] . ALA also protect organs and other tissues from toxic metal accumulation, such as from mercury, lead or cadmium, by forming insoluble bonds with those metals and ensuring their secretion from the body. [5]

In addition to aiding in energy production and providing cellular protection, ALA is instrumental in glucose metabolism, simultaneously lowering blood glucose levels and increasing insulin sensitivity, [6] [7] [8] making it a highly beneficial supplement for diabetics. ALA has also been found to alleviate diabetic neuropathy, [9] a degenerative nerve condition involving pain and numbness in the extremities. In fact, one randomized, double-blind study in Germany showed over 80% of participants who received 600mg ALA daily reported significantly fewer adverse neuropathy symptoms than the placebo group. [10]

Health Thru Nutrition’s Alpha Lipoic Acid provides 600mg pure ALA in one vegecapsule to help you reach your goals. It is Non-GMO, hypoallergenic and, like all of HTN’s quality products, is manufactured in a cGMP facility in the United States.

Directions: As a dietary supplement, Adults: take one (1) VegeCap daily or as directed by your healthcare professional.